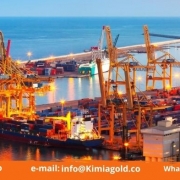 During the four-month period of this year, a total of 1,459,721 tons of various goods were unloaded and loaded in Bandar Lengeh and its adjacent ports, of which, 691,590 tons, showing a growth of 13% is allocated to non-oil goods and 768,131 tons is allocated to petroleum products.

The main export shipments included fruits and vegetables, nuts, minerals and construction materials, showing a 39% increase, and also 291,758 tons of these shipments were shifted as a Cabotage, representing a 32% increase compared to the last year.

During the first four-months of this year, more than 17,000 tons of non-oil goods entered the ports of western Hormozgan, showing a decrease of 17% compared to the last year.

The volume of exports of agricultural and livestock products in Bandar Lengeh reached 89,328 tons, indicating a 3% increase.

During the first four months of this year, the transit volume of non-oil goods (mainly vehicles) reached 27,121 tons, of which 13,016 transit vehicles were transported in the ports of western Hormozgan.

A growth of 428% in container operations in Lengeh port during this period was evident. Moreover, 2,692 TEU filled containers were unloaded and loaded in this port.