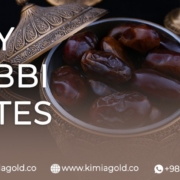 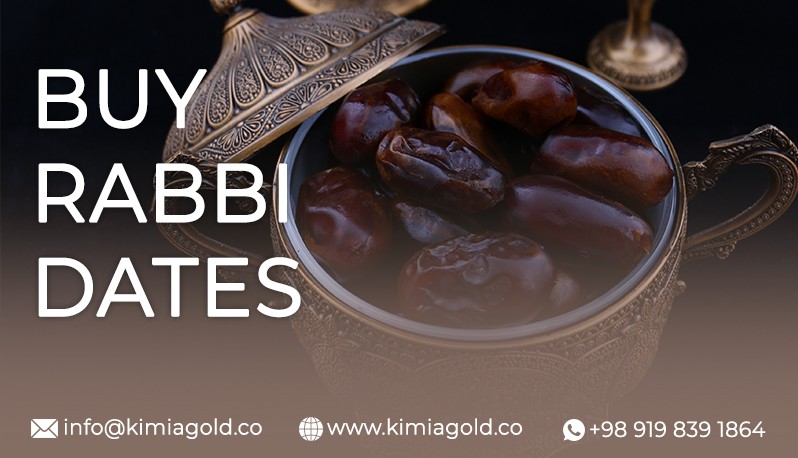 Rabbi is one of the luxury dates in Iran, which also has a high price.

The skin and flesh of these dates stick together.

There is high similarity between Rabbi Dates and Piarom dates. Rabbi dates are comparatively darker.

By having a moisture of 16%, these dates are considered as semi-dry dates.

To store Rabbi for a long duration of approximately 18 months, they must be stored in proper packaging in temperature between -5° C to +5° C.

Due to low humidity, these dates are considered to be dates with high shelf life, and this has caused them not to face problems such as the need for refrigeration in the export discussion.

Their cultivation place is Sistan and Baluchestan province, located south of Iran.

These dates can be dipped in edible paraffin oil, which is an expensive oil. This oil is used to separate sticky dates and give them shiny appearance.

They are mostly exported in 450 gram, 5kg and 10kg packaging.

Kimia Gold Company can be considered as the most outstanding company in the UAE, Iran, Europe, Malaysia, Indonesia, Bangladesh, India and etc. to buy Rabbi Dates from.

Indonesia is a country located in Southeast Asia.

It consists of seventeen thousands islands.

Indonesia has a population of 270 million, being the fourth most populous country in the world.

It holds the first position as the most Muslim populated country.

Iran and Indonesia, 2 Muslim majority countries, have good trade relations and also they are both responsible for representing the Islamic world globally. Iran’s ninth export destination in the world is Indonesia. Iran exports to Indonesia was US$786.86 Million during 2018.

During holy festivals and events such as Ramadan, this 270 million consumers buy sweets such as Rabbi Dates from a genuine supplier such as Kimia Gold Company. Kimia Gold is referred by many importers to buy Rabbi Dates in Indonesia.

According to a study published in Indonesia, regular consumption of dates, Rabbi Dates, has led to a significant increase in the level of hemoglobin, helps in preventing anemia.

Thus, considering these factors, the global date market is expected to witness significant growth over the forecast period.

Good trade relations between Iran and Indonesia has led to many importers to buy high quality Rabbi Dates in Indonesia from Kimia Gold Company.

Considering Indonesia’s tropical climate, you must buy Rabbi in Indonesia, from a genuine supplier like Kimia Gold Company, who owns a packaging unit, hence this company designs the most luxurious and standard packaging for Rabbi dates.

Bangladesh is a country located in Southeast Asia.

It has a population of 163 million, being the eight most populous country in the world. 90% of its population is Muslims.

It shares land border with India, hence there is a strong trade bond between these 2 countries. You can buy Rabbi Dates in Bangladesh imported from India.

Kimia Gold Company as the sole company to supply Rabbi Dates in Bangladesh is equipped with strapping, vacuum, shearing and shrink wrap machines.

These occasions are celebrated with public ceremonies, parades, and rallies by citizens, political speeches, fairs, concerts, and various other public and private events, and many schools and colleges organize fairs, festivals, and concerts.

You can find sweets such as Rabbi Dates in these festivals, as it is a holy fruit. Importers buy luxury packaged Rabbi Dates in Bangladesh from Kimia Gold Company who is a reputable company.

Buy Rabbi Dates in the UAE

Formula One is particularly popular in the United Arab Emirates. The emirate of Dubai is also home to two major golf courses. Luxury sweets such as Rabbi Dates are served at these events. Kimia Gold Company is the importers first choice to buy Rabbi Dates from in the UAE.

Kimia Gold is most genuine company referred by many importers to buy best quality Rabbi Dates in the UAE.

According to latest survey, India is considered as the first and largest buyer of Dates such as Rabbi. For the record, this year, dates worth Rs.15 crore were consumed during Ramadan in the Kashmir valley alone.

You can buy high quality Rabbi Dates in India from Kimia Gold Company, who has many years of experience in Rabbi Dates export.

These dates can be consumed by patients, as they help to strengthen bones, keep the nervous system energized, improve digestion and keep cholesterol under control.

Importers buy high quality Rabbi in exclusive and standard packaging from Kimia Gold Company who is an experienced date exporter.

Malaysia is a country in Southeast Asia.

Kuala Lumpur is the national capital and largest city.

There is huge consumption of Rabbi by these multi-ethnic group. Importers refer to Kimia Gold Company to buy first grade Rabbi dates in Malaysia.

As Malaysia has a rapid date growing market, there is high demand of Rabbi Dates by importers. Importers prefer to buy high quality Rabbi Dates in Malaysia from a genuine company like Kimia Gold Company.