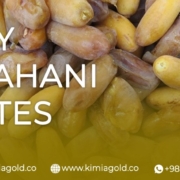 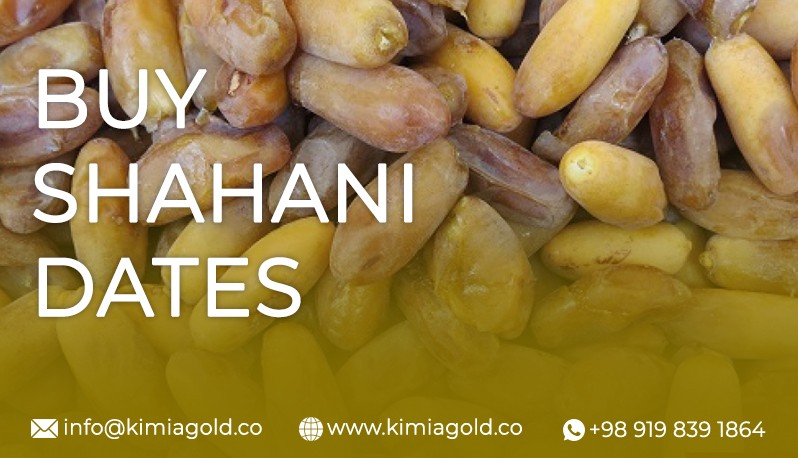 Shahani dates are the most economic dates.

These dates are light brown to Golden in color.

Sometimes this date is consumed as Kharak and its Kharak is quite sweet and has no special taste.

Their moisture content is 17%, hence they are considered as semi-dry dates.

These dates should be stored with proper conditions and packaging.

For a long duration of approximately 18 months, they must be stored in proper packaging in temperature between -5° C to +5° C.

They are widely cultivated in Fars province, located south of Iran.

Shahani dates are similar to Rabbi Dates in size.

This date is used more intensively and is one of the most special Iranian dates.

These dates are exported dry in 3 kg pressed and vacuum packed.

According to latest survey, India is considered as the first and largest buyer of Dates such as Shahani.

To buy first grade Shahani dates in India, importers face to Kimia Gold Company, who is equipped with a cold storage, hence it can supply Shahani dates throughout the year.

These dates can be consumed by patients, as they help to strengthen bones, keep the nervous system energized, improve digestion and keep cholesterol under control.

Realizing the importance and health benefits of Shahani Dates, importers intend to buy Shahani Dates in India from Kimia Gold Company which is a well-equipped Shahani supplier.

Indonesia, a country located in Southeast Asia, consists of seventeen thousands islands, with a population of 270 million people.

This country is the fourth-most populous country and it holds the first position in the most Muslim populated country.

Iran’s ninth export destination in the world is Indonesia.

Kimia Gold being equipped with a packaging unit, can be your best choice to buy luxury packaged Shahani dates in Indonesia.

According to a study published in Indonesia, regular consumption of dates has led to a significant increase in the level of hemoglobin, helps in preventing anemia.

Thus, considering these factors, the global date market is expected to witness significant growth over the forecast period.

The Indonesian archipelago has been a valuable region for trade since at least the 7th century.

The economy of Indonesia is the world’s 15th largest by nominal GDP and 7th by GDP at PPP.

Kimia Gold Company by having all the knowledge about Indonesia’s tropical climate, its long transportation distance from Iran and its trade laws and regulations, has maintained a good position between importers as the best center to buy high quality Shahani dates

Buy Shahani Dates in the UAE

It has maritime borders in the Persian Gulf with Iran.

Iran has exported commodities worth about $1 billion to the UAE during the first three months of this year.

Many importers travel to Dubai, to buy luxury packaged Shahani dates, Kimia Gold being equipped with a packaging unit and a branch installed in Dubai, is the first choice of importers to buy Shahani dates in the UAE.

Formula One is particularly popular in the United Arab Emirates.

The emirate of Dubai is also home to two major golf courses.

You will find high quality Shahani dates in these events.

Importers buy these Shahani dates in the UAE from Kimia Gold Company, who has a branch installed in the UAE.

The estimated population of the UAE in 2020 was 9.89 million, of which 7.8 million were expatriates.

Nearly 500,000 Iranians living in the UAE today, mainly in Dubai, which represents nearly 5% of the population. Islam is the official religion.

Kimia Gold is most genuine company referred by many importers to buy best quality SHahani Dates in the UAE.

Bangladesh a country located in Southeast Asia, shares land border with India. There is a strong trade relation between India and Bangladesh.

Considering Bangladesh drastic climate, you have to buy Shahani dates which are stored in cold storages and do not have any insects.

Bangladesh was Iran’s 33rd export destination during the year.

Iran mainly exported bitumen, Portland cement and pistachios to Bangladesh during the 12 months.

It is the eighth-most populous country in the world, with 164 million people. 90% of its population is Muslims.

These occasions are celebrated with public ceremonies, parades, and rallies by citizens, political speeches, fairs, concerts, and various other public and private events, and many schools and colleges organize fairs, festivals, and concerts. You will find sweets such as Shahani dates at these events. Importers prefer to buy Shahani dates in Bangladesh from Kimia Gold Company.

Malaysia has a newly industrialized market economy, ranked third-largest in Southeast Asia and 33rd-largest in the world.

It is a founding member of ASEAN, EAS, OIC and a member of APEC, the Commonwealth and the Non-Aligned Movement.

Malaysia has had one of the best economic records in Asia.

Malaysia’s economy in 2014–2015 was one of the most competitive in Asia, ranking 6th in Asia and 20th in the world, higher than countries like Australia, France and South Korea.

As Malaysia has an active date growing market, buyers buy Shahani dates from Kimia Gold, who has established a strong position in Malaysia.

Importers buy Shahani dates in Malaysia from Kimia Gold Company, who supplies these dates in FOB and CIF to port Klang.

In 2016, Malaysia ranked the fifth position on The World’s Best Retirement Havens while getting in the first place as the best place in Asia to retire.

A warm climate combined with a British colonial background makes it easy for foreigners to interact with locals.

High quality Shahani dates in Malaysia can be bought from Kimia Gold Company.

A total of 238,152 tons of dates worth $211.64 million were exported from Iran in the last Iranian year (March 2019-20). To buy high quality Shahani Dates in Malaysia, you can refer to Kimia Gold Company.