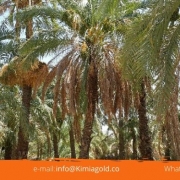 Date Cultivating Regions in Iran : Iran is a country with diverse climates.

This issue provides the conditions for the growth of different fruits.

Dates need hot and dry climates for their growth.

The south of Iran has suitable conditions for the growth of different dates.

In fact, by the south, we also mean the south-west and south-east of the country.

These regions are the date-growing regions.

In the following, we examine the important regions in Iran as well as the dates that are produced there.

Kerman is one of the southern provinces of Iran and enjoys higher economic significance.

The Mazafati date, also known as the Kimia date, grows in the Bam and Jiroft cities of Kerman province.

The Kimia date is one of the most important dates produced in Iran and abundantly exported to varying countries.

The Kaloteh date also grows in the Jiroft city of Kerman province.

This date is called the Kali date in the world. It resembles Kimia; however, it is drier than it.

Of course, this date is cheaper than the Kimia date. In addition to dates, Kerman has also other products with high importance.

Pistachio is one of these products.

Hoemozgan is located in the south of Iran and close to the Persian Gulf.

The most expensive date of Iran grows in this province, and Hajiabad city is the growth center of this Date.

The Piarom date, called the Marian date, is the most expensive date of Iran. This date is mostly exported and rarely consumed in Iran.

This province is mostly important for the production of Piarom.

You can also take a look at Kimia dates price .

Bushehr is one of the southern provinces of Iran.

Different dates are produced in this province, and they are extensively consumed in Iran.

Kabkab is the most popular date of Iran and grows in Dashtestan town.

In addition to Kabkab, the Alouei date, known as Lolo, grows in this province.

Khasouei, the tiniest date in the world, also grows in this province.

Jam city in Bushehr province is the growth center of the province.

You can also take a look at Kimia dates supplier .

Khuzestan is one of the main provinces in Iran’s economy.

Those dates that are economically significant grow in this province.

The Sayer date, also known as Estameran, is the most important date of Iran.

Sayer, as one of the most significant dates in the world, is an industrial date.

This date is ranked in the world by America and possesses international standards.

The Sayer date is the most important commercial date in the world’s date market.

The Kabkab date also grows in this province.

Behbahan city is the producer of the Kabkab date in Khuzestan province.

The Barhi date also grows in Abadan, and it is one of the special dates.

You can also take a look at Buy Kimia dates .

Fars province widely contributes to the country’s date production per year and is suitable for date growth due to its geographical location.