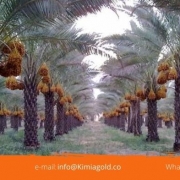 Director of Jihad-e Keshavarzi of Nikshahr city said: “Since late July, The harvesting of the palm has began with the harvesting of early-maturing cultivars including Kotomi, Negal, Rabi Sarchahi, Abdandan, Shokri from Nikshahr palm groves with an area of ​​120 ha.”

Stating that Nikshahr has 4,000 ha of palm groves, Habib Raeisi added: “Out of this, 3850 ha are fertile and the rest are infertile.”

“It is predicted that 27,000 tons of different kinds of palm will be produced in Nikshahr in 2020 for domestic and export sales”, he acknowledged:

He said, pointing out that palm groves constitute 70% of all Nikshahr’s gardens, “currently, 4600 people are employed.”

He added: “More than 42 palm cultivars are cultivated in Nikshahr, with the highest area under cultivation for Mazafati cultivar.”

Raeisi stated: “currently, six cold storage facilities with a 4,600 tons capacity are used in Nikshahr, and due to the high-volume production, the capacity of the new cold storage space need to be increased by 6,000 tons.”