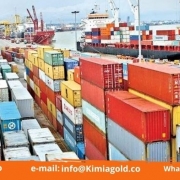 The export of 357,823 tons of goods by 14,883 cargo fleets in the first four months of this year through the Milak and Mirjaveh border terminals of Sistan and Baluchestan Province.

He said that food materials, cement, fuel, liquefied petroleum gas, bitumen and hydrocarbons are the main export goods that were exported in the four months of this year through Mirjaveh and Milk border terminals.

He added: “Considering that cross-border trade is one of the main indicators for establishing the relationship with neighboring countries and economic development of the region, this General Directorate focuses on the comprehensive plan for the development of border terminals in order to increase cross-border trade and development of mutual economic cooperation with Afghanistan and Pakistan. Moreover, during this period, 162,948 tons of goods with 7014 units were transited through the border terminals of Sistan and Baluchestan.

Bagheri announced the import volume of 1,225,498 tons of goods through 77,085 cargo fleet trips in the first four months of this year by the cargo fleet of Sistan and Baluchestan and added: “this volume of goods were transported by 63 domestic freight transport companies of the province “.

He stated that petroleum materials, cement and construction materials were the main goods transported in Sistan and Baluchestan during the above-mentioned period, adding: “Zahedan city with 621,413 tons, equivalent to 49% of the total freight had the highest amount of domestic freight in the province” .

Finally, the Deputy Minister of Transportation of the General Directorate of Highways and Road Transportation of Sistan and Baluchestan Province pointed out:” Currently, 9520 drivers, 6732 freight fleets with an average life of more than 13 years, as well as 69 domestic freight transport companies, three public cargo terminals, two corporate employers unions and two corporate employees’ unions of drivers under the supervision of this general administration are invloved in the deomestic public road transport of goods.