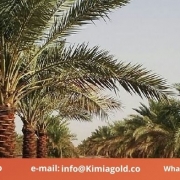 In recent years Iran has been a leading date’s fruit producer in the world with an annual production of 900000 metric tons from 218000 ha of cultivated Land.

With an annual production of one million tons of dates, Iran is ranked second in the world in terms of date production. In the world ranking, Iran has the highest area under date cultivation in the world, but due to low average production yield, it is in the second place after Egypt.

Palm is a plant species that is highly resistant to harsh conditions and needs less irrigation than other fruit trees.

Date products have a very high commercial and nutritional value and are suitable for export due to their ease of packaging and transportation.

Date palms are grown mainly in South, South East, and South West of the country.

Dates are commonly cultivated in 15 provinces of the country, two-thirds of which date production in Iran is related to the five provinces of Kerman, Khuzestan, Sistan and Baluchestan, Bushehr and Hormozgan.

There are about 400 varieties of dates known in Iran, but only few of them are commercially important.

Rotab is the pre-ripening stage of dates. It has more moisture and less sugar than fully ripe dates.

Dates have been in the human diet since ancient times and have been one of the oldest fruits cultivated by humans.

Some of Iranian dates harvested for commercial use are:

The production of palm groves starts in three stages from the middle of July in the form of Kharak and Rotab is obtained in August, and then in September it is the turn of harvesting dates and date pickers rise from the soaring palms at a temperature of 50 degrees and they pick their product.

Of course, dates are also different from other fruits. For example, most dates have a lot of juice or the market conditions sometimes do not allow the farmer to spend much to harvest.

The time of date harvest is in fact one of the most important economic events in the country because the export of dates has been able to help the country’s economy a lot in recent years.

Dates should be stored in a dedicated date refrigerator after harvest, as the storage conditions for different types of dates are different. For example, the storage temperature of Mazafati and honey rotab is different from each other, and if the two are kept in the same condition, they may be damaged.

The date refrigerator should also be equipped with a proper ventilation system away from the sun. The issue of ambient temperature is very important in the storage of dates. It should also be noted that the location of the cold storage should be completely isolated and not the entry point of living organisms and pests, because dates attract organisms and insects due to their sweetness.

On the other hand, the issue of pests is also important, because if the date has a pest, it cannot be stored well in the refrigerator and causes it to spoil. Some dates do not need to be refrigerated for short-term storage, but if they are intended to be stored for several months, they must be stored in the refrigerator. Dates such as Zahedi can be stored at room temperature for a short time.

Introduction of a date supplying Company

Kimia Gold Company, with a long history of selling dates in India and a thorough knowledge of trade and export laws between the two countries, sends the required tonnage of buyers to India every year.

With an equipped cold storage of 5,000 tons in Bam, Kimia Gold Company keeps all kinds of dates in the cold storage after harvest and performs all the steps from packaging to export in equipped halls.