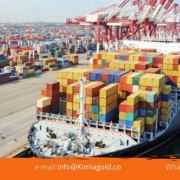 According to the declaration of the customs spokesman, the foreign trade report of the country in the time interval between early February 2020 and mid-April 2020 was 27 million and 613 thousand tons, weighing 14 billion and 431 million dollars, and the weight of exports incorporated 2.9 times of the imports.

You can also take a look at Kimai dates .

He added: “in terms of weight and value, the country’s exportation has decreased by 20 and 27%, respectively, year-on-year. The outbreak of the coronavirus pandemic, limitations of land boundaries, reduction in the consumption of some commodities, including nutrients, and reduction in the global price of oil derivatives in this period are of the reasons for this recession”.

According to his statement, the country’s importation, over 85% of which comprised production inputs, essential goods, and machinery, witnessed weight and value growth of 10.3% and 7.5%, respectively, as compared with the early February 2019 – mid-April 2019.

Concerning the ineffectiveness of the conditions on the importation, Latifi explained: “one of the main reasons for the small effect of the Corona disease outbreak on the country’s importation is the imports of the essential goods and production inputs from seaways and ports, originating from distant countries, through observing hygienic protocols the countries are obliged to consider in their sea transportation.

He expressed that: “to prevent any suspension or slowdown in the exportation process of the country, the Iran Customs sent separate letters to the customs of Turkmenistan, Pakistan, and Turkey and requested the execution of control and hygienic protocols by the hygienic network teams of parties in the entrances and exits of common boundaries. Besides, in another correspondence to the World Customs Organization, it requested the accompaniment of the members to engross their attention to hygienic protocols instead of closing their boundaries. Hence, in this interim and with the centrality of this important organization, all members and countries, similar to the SARS, Ebola, and acute Influenza epidemic period, can deal with fluent trading in addition to attending the health of the human community by observing all hygienic guidelines.