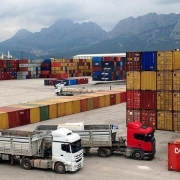 The volume of trade in the corresponding period of last year (March 21-Oct. 22, 2019) stood at $49.57 billion, indicating that commercial exchanges have declined by about 23% on a year-on-year basis.

In other words, Iran recorded $1.81 billion in trade deficit during the period under review.

When compared with the corresponding period of last year (March 21-Oct. 22, 2019), the exports registered 17.5% and 23% decline in tonnage and value respectively, he was quoted as saying by IRNA.

Also known as necessity goods, essential goods are products consumers will buy, regardless of changes in income levels.

Amid high inflation and diminished purchasing power, the Iranian government has sought to ensure a steady supply of essential goods at subsidized prices.

Following the re-tanking of the national currency in early 2017, the government introduced stringent rules like banning the import of non-essential goods, especially those produced inside the country (known as Group IV goods).

It allocated subsidized currency at the rate of 42,000 rials to a dollar to 25 categories of goods (otherwise known as Group I or essential goods) to help protect consumers against galloping inflation, rampant price gouging and hoarding, not to mention the high and rising cost of living.

Importers of products in Group II were to meet their forex requirements from the secondary forex market, known by its Persian name Nima. Importers of goods in Group III could buy hard currency from exporters who were not required to offer their forex earnings on Nima.

A total of 25.09 million tons of essential goods worth close to $15.5 billion were imported into Iran during the last fiscal year (March 2019-20) to register a 20.77% and 17.13% increase in weight and value respectively compared with the year before.

This amount of essential goods’ imports accounted for close to 71% and 35% of the volume and value of last year’s total imports respectively, according to IRICA Spokesman Rouhollah Latifi.

Imam Khomeini Port in the southern Khuzestan Province is the main hub for the import of essential goods in Iran.

The port, according to Adel Deris, director general of Khuzestan Province’s Ports and Maritime Organization, possesses 40 wharfs, 140 kilometers of railroads within its premises and is equipped with the latest loading and unloading facilities

Close to 90% of Iran’s demand for livestock feed raw material as well as 79% of grains are imported through this southern port.

The government plans to continue subsidizing essential goods in the next fiscal year (March 2021-22).

According to Vice President Mohammad Baqer Nobakht, who doubles as the chairman of Iran’s Plan and Budget Organization, the government will channel earnings from oil exports to import essential goods at the subsidized rate of 42,000 rials per US dollar.

Iraq overtook China as Iran’s main export destination with $4.8 billion worth of imports from Iran.

Three border crossings with Iraq, namely Chazzabeh and Shalamcheh in southern Khuzestan Province and Mehran in the western Ilam Province, reopened for exports during all weekdays as of Sept. 12.

Amid the spread of the new coronavirus, customs procedures were carried out only on Sundays and Wednesdays at most border terminals with Iraq, except for Khosravi in western Kermanshah Province, which was open to trade during all weekdays, according to Latifi.

Chazzabeh was the last of seven official border crossings between the two countries that reopened after about six months following the outbreak of coronavirus. At the beginning of its reopening in late July, 30 trucks were allowed to cross the border.

“Now 170 trucks carry mainly vegetables and construction materials to the neighboring country via Chazzabeh each day,” the spokesman said.

A total of 329,000 tons of commodities worth more than $183 million were exported from Mehran border crossing during the first half of the current Iranian year (March 20-Sept. 21).

“The exports come as Mehran was closed down for three whole months due to the outbreak of Covid-19. Two months after the outbreak, the border was opened for two days per week,” Rouhollah Gholami, the director general of Ilam Customs Administration, was quoted as saying by the news portal of Iran Chamber of Commerce, Industries, Mines and Agriculture.

The official noted that 48,169 tons of agricultural products worth $24.78 million were exported to the neighboring Iraq from Mehran border crossing during the six-month period.

According to Gholami, an average of 300 trucks carrying Iran’s export goods cross Mehran border to Iraq every day.

Iraq closed its international borders and provincial boundaries in March, except for the delivery of essential goods such as food, as it sought to curb the spread of coronavirus.

Iran also exports to Iraq through border crossings with the Kurdish region of the neighboring country, namely Bashmaq, Parvizkhan and Tamarchin, which have been open all along the coronavirus pandemic.

Amid restrictions imposed by the Iraqi government on cross-border trade due to the spread of the new coronavirus, Iran has been directing the bulk of its exports to the neighboring country through borders with the Iraqi Kurdistan.

About 8.1 million tons of goods worth $3.8 billion were exported to from Iran to Iraq through the Iraqi Kurdistan Region during the last fiscal year that ended on March 19, according to the Spokesman of the Islamic Republic of Iran Customs Administration.

According to Superintendent of Kurdestan Customs Administration Bakhtiar Rahmanipour, 90% of Kurdestan Province’s foreign trade pass through Bashmaq, located in Marivan County of the province.

China with $4.4 billion followed Iraq in terms of imports from Iran during the seven months under review.

Other main destinations for Iranian exports included the UAE with $2.2 billion, Turkey with $1.4 billion and Afghanistan with $1.3 billion.

“Top exporters to Iran were China with $5.1 billion, the UAE with $4.7 billion, Turkey with $2.2 billion, India with $1.2 billion and Germany with $1 billion,” the IRICA chief was quoted as saying.

Global trade has dropped by 30% following the outbreak of coronavirus and Iran was no exception.

“Seven countries, including China, Iraq, Afghanistan, the UAE and India, account for 75% of our foreign trade; over 50% of Iran’s non-oil exports are headed to Iraq and China, all indicative of our export vulnerability,” Majid Reza Hariri, chairman of Iran-China Chamber of Commerce, was quoted as saying recently.

“Natural gas, gas condensates, petrochemicals and unprocessed minerals make up 70% of Iran’s exports. Covid-19 has pushed down the demand for and the prices of these exporting items,” he said.

“For our production lines to be operational, about $45 billion worth of essential goods, pharmaceuticals and medical equipment need to be imported. Given the restrictions placed on oil sales, this figure seems to be unreachable.”

“Iran has to prepare for a 30% decline in export value in the current Iranian year (March 2010-21) compared with last year due to the impact of the spread of the novel coronavirus on national and international trade,” a member of Iran Chamber of Commerce, Industries, Mines and Agriculture board of directors, Pedram Soltani, said.

“Under the current circumstances, it is estimated that the country’s exports will fall between $10-12 billion compared with last year. The main products, which will experience a plunge due to the pandemic, are petrochemicals, steel, mineral products, tile, ceramics and nuts,” he was quoted as saying by ISNA.

Soltani, the former deputy head of ICCIMA, noted that China is most likely the least affected economy by the pandemic and since it is Iran’s top trading partner, exports to this country will hopefully remain unaffected.

“Yet, the outbreak of Covid-19 as well as the nosedive in oil prices will make Iraq, our second biggest export destination, very cautious and we will face limitations on the commodities we can export to the neighboring country,” he said.

Soltani added that based on World Trade Organization’s prediction, world trade will plunge by 13-32% in 2020 (best and worst-case scenarios), noting that it is likely that the economic crisis awaiting the world will be more intense than the one experienced in 2008.