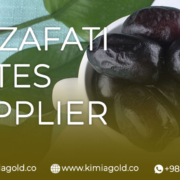 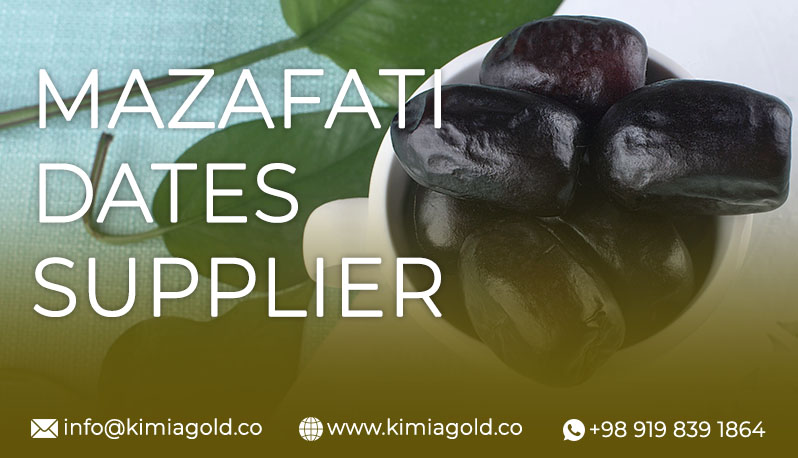 Mazafati Dates are one the dates that have a lot of demand in Iran as well as neighboring countries.

There are many types of these dates but only few of them exported globally.

Many importers want to purchase A-Grade Mazafati Dates with a good price.

Kimia Gold Company is one of the largest supplier of Mazafati dates.

Through the link below, you can contact Kimia Gold Company Experts for further information regarding this date.

Mazafati dates can be considered as one of the most delicious and tasty types of dates in the world.

This date is also known as Kimia, Bami date and Rotab of Iran.

Due to the regular and special customers of this date, the export of Mazafati dates has always had a good exchange rate for the date export sector.

Iran is the main Supplier of this date as it grows only in Iran.

Due to the sensitivity of this date, the suppliers in Iran must try their best to provide the best packaging in order to avoid spoilage of dates.

Kimia Gold Company is the main supplier of Mazafati Date, equipped with a cold-storage in Bam city, where best Mazafati dates are cultivated.

Kimia Gold is a well-known brand among Asian countries, as it pays a lot of attention to their packaging, services provided to customers and quality of the dates required.

You should know that many Mazafati Dates suppliers in Iran cannot make transactions in other currencies except Rials or Toman.

Hence importers face to other countries to purchase dates, especially Dubai which is a massive date supplier hub.

Due to the proximity of Iran and Dubai, you will be able to find this delicious Mazafati in Dubai.

Kimia Gold Company, with understanding the concerns of importers, have solved this problem by installing a Kimia Gold Branch in Dubai.

This date is also known by other names in Dubai such as Kimia Dates.

Kimia Gold Branch in Dubai provides the option of making transactions in other currencies such as Dirham or Dollars.

India is a country in South Asia. It is the second-most populous country, the seventh-largest country by land area.

Kimia Gold is a well-known Brand in India.

Kimia Gold Company as the main supplier of Mazafati in India, follows all the rules and regulations of export to this country and supplies dates in packages in accordance with the Indian market.

In the holy month of Ramadan, a large tonnage of Mazafati is supplied to India, as there are nearly 150 million Muslims in India.

Kimia gold Company has the potential to supply dates through FOB and CIF to India, and also to make transactions in different currencies.

Indonesia is located in the Southeast Asia. It consists of 17,000 Islands.

The Indonesian archipelago has been a valuable region for Import/Export trade since 7th century.

There is a lot of demand for Mazafati dates due to the vast Muslim population in Indonesia.

Mazafati is a product that people’s taste is very influential in choosing it.

Kimia Gold Company is the main suppliers of Mazafati Dates in Indonesia.

With regard to the hot and humid weather conditions of Indonesia, Kimia Gold Company designs the best packages for export to this country.

Bangladesh is the eight most populous country in the world.

90% of its population are Muslims.

Hence it is the third largest Muslim majority in the world.

In the holy month of Ramedan, there is huge tonnage of request for Mazafati dates, as it is a well-known and tasty date in Indonesia. It is also a substitute for food as it regains the lost energy during fasting.

This country shares a border with India. Hence there is a large tonnage of trade going on between these two countries yearly.

India being the biggest importer of Mazafati dates, also supplies this date to Bangladesh very easily.

Kimia Gold Company is the biggest Supplier of Mazafati dates in Bangladesh as it provides the best services and the best price and the best packaging with accordance to trade rules and regulations of Bangladesh.

Malaysia is a country with 60% Muslim population.

Malaysia is a very vast and important growing market for Mazafati dates in the recent years.

Malaysia is one of the regular customers of Iranian dates due to its good trade relations with Iran.

With experienced experts and staff, Kimia Gold Company is fully prepared to provide its best services to Malaysia and supply the best quality Mazafati dates, especially during holy month of Ramadan due to its massive Muslim population.

Port Klang is the largest and most important port in Malaysia.