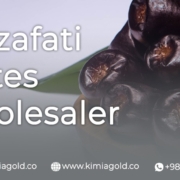 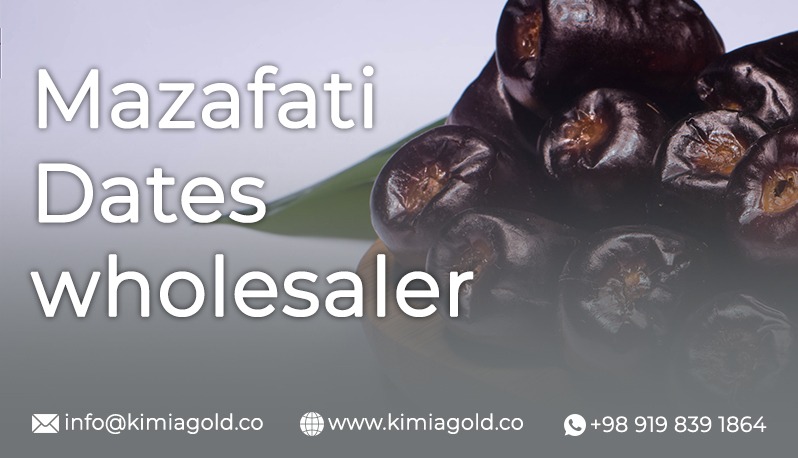 Mazafati dates are called as Kimia dates in India and some other countries.

These dates are the most delicious and most consumed types of dates in the world.

These dates are used in Rotab stage.

Their moisture content is 15-35%, hence they are considered as wet dates.

These dates are sensitive dates, hence their storage conditions are also of great importance. For a long duration of approximately 18 months, they must be stored in proper packaging in temperature between -5° C to +5° C.

These dates should be stored in cold storages equipped with methyl gas.

Best type of these dates are black in color.

The skin and flesh of Mazafati dates are easily separated.

They are widely cultivated in Kerman province, located south of Iran.

Mazafati is one of the dates that is always exported throughout the year.

Grade-A and Grade-B Mazafati are also used in bulk exports, which are packaged in a weight of 5 kg. Dates used in bulk are drier

A large share of dates exported from Iran is the export of Mazafati dates.

The United Arab Emirates, the UAE, a country in Western Asia, has maritime borders in the Persian Gulf with Iran. Iran has exported commodities worth about $1 billion to the UAE during the first three months of this year.

Due to its geographical location, quality transport infrastructure (including the port of Jebel Ali in Dubai) and tax incentives (no direct taxation for all foreign companies), the UAE is considered as key trade center. It’s most populous city of Dubai is a global city and international aviation and maritime trade hub.

Kimia Gold Company by having a branch installed in Dubai, has become the importers’ magnet for Mazafati Dates Wholesaler.

The estimated population of the UAE in 2020 was 9.89 million, of which 7.8 million were expatriates. Nearly 500,000 Iranians living in the UAE today, mainly in Dubai, which represents nearly 5% of the population. Islam is the official religion. There is huge consumption of Mazafati Dates by these expatriates and of course Iranian crowd.

Formula One is particularly popular in the United Arab Emirates. The emirate of Dubai is also home to two major golf courses. During these festivals and events, there is high tonnage of Mazafati imported to Dubai. It is easier to export Mazafati to Dubai then to other countries. Kimia Gold Company being fully informed about this country, is popular Mazafati Dates Wholesaler among importers in Dubai.

India is located in South Asia. It is the second-most populous country.

Bombay (Mumbai), India’s largest city, has a metropolitan area population of more than 15 million. Bombay is the nation’s major port and commercial center as well as a key industrial center.

Today, India is the world’s largest importers of dates. They look for a genuine Mazafati Dates Wholesaler like Kimia Gold Company.

Hence Indian importers buy Mazafati Dates from Kimia Gold Company being the largest Mazafati Dates Wholesaler in India, who has adapted to India’s population and their high Mazafati consumption.

Considering Indonesia’s 260 million date consuming hub, Iran’s good relation and vast trade with Indonesia and the existence of a common religion has made Kimia Gold Company the most recommended Mazafati Dates Wholesaler in Indonesia as it has maintained a good reputation between Indonesian importers by providing best quality Mazafati Dates.

Considering Indonesia’s climate which is almost entirely tropical, Kimia Gold Company takes care of Mazafati dates by storing them in their cold storage facility, and finally shipping them in reefer containers, and on time delivery. Hence Kimia Gold is a reputable and genuine Mazafati Dates Wholesaler.

Bangladesh is a country in South Asia. It shares land borders with India to the west. Bangladesh and India are South Asia’s largest trading partners.

These occasions are celebrated with public ceremonies, parades, and rallies by citizens, political speeches, fairs, concerts, and various other public and private events, and many schools and colleges organize fairs, festivals, and concerts. The consumption of sweets and specially Mazafati Dates reaches its maximum level on these holy days. Kimia Gold Company providing Mazafati across the globe, is recommended Mazafati Dates Wholesaler in Bangladesh as it can feed 164 million people with their high quality Mazafati Dates.