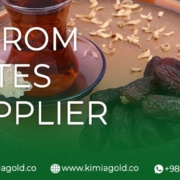 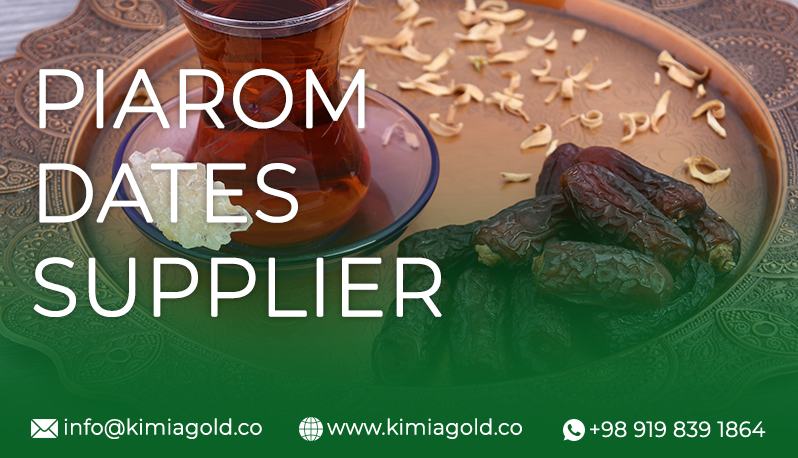 Piarom is the most expensive and luxurious date in the world as it grows only in few areas in iran.

The meat and skin of these dates stick together.

Hence they can be easily transported and exported.

Through the links provided below, you can contact Kimia Gold Company Experts.

Unfortunately, in the date market, due to the presence of profiteers, in recent years, it has been observed that other dates are given to importers at a lower price instead of Piarom dates.

Importers are looking for A-Grade Piarom dates of Haji Abad.

There is a huge demand of this date in the world market, hence there must be proper and standard packaging for this date.

Kimia Gold is a well-known brand for its exclusive packaging.

This company spends a lot of time to supply Piarom dates with strong and standard packages.

Dubai shares a close proximity with Iran, hence it a very important city in terms of dates.

Many suppliers in Iran can make transactions in Rials or Toman which is a big issue for date importers.

Hence they will buy Arabian dates from Arabic countries.

Kimia Gold Company by having a branch in Dubai, has made the purchase of Piarom dates available in Dubai, and buyers can make payments and transactions in other currencies such as Dollars or Dirhams.

In Dubai, Piarom Dates are called as Maryami Dates or Chocolate dates as they taste like chocolate.

With having a branch in Dubai, Kimia Gold Company can supply first grade Piarom Dates.

Piarom dates are commercial and first-grade dates, which are considered as export dates due to their good quality and high marketability.

So far, Piarom dates have been able to attract the attention of global markets.

The price of Piarom dates is also higher than other dates, which makes date exporters have a good income from the sale of these dates.

This date is also one of the best dates in the world and Iran.

Most of these dates are exported to European countries, but other countries also buy them in the desired tonnage.

Hence while exporting to European countries, Piarom suppliers must pay a great deal of attention to their product packaging.

Kimia Gold Company is the wholesale supplier of Piarom Dates in Europe, Kimia Gold brand is famous in Europe for their exclusive packaging.

In addition to wholesale sales, this company also has the ability to sell in retail.

Kimia Gold Company is also equipped with Strapping and Shearing machines on the requirement of the customer.

This company also has other branch in France, European customers can come and visit our branch see sample of our dates in France.

India is the biggest importer of Piarom dates.

India is one of the most populous country in the world.

As Indian people are in love with sweets and their taste are in favor of dates, there is a huge demand of Piarom dates.

Indian importers travel to Bam every year in search of a genuine Piarom dates Supplier, who will provide Good quality Piarom in good Price.

As Haji Abad and Bam city are near to each other, you can find Piarom dates in Bam also.

Kimia Gold Company, is the main supplier of Piarom dates in India.

Piarom is supplied to India mostly in 450 gram and 5Kg packaging.

Hence they provide continuous services throughout the year and the best packaging for Piarom dates.

Indonesia has the largest population of Muslim.

During Ramadan, there is a lot of request for Piarom dates as they can be used as a food substitute to regain the lost energy during fasting.

Jakarta, its capital, is the second-most populous urban area in the world.

The thin skin of Piarom dates is dark brown and due to the fact that the flesh and skin of the date are completely attached to each other, it has given a beautiful and desirable appearance to this type of date.

This feature of Piarom dates has given it the ability to be easily washed.

Piarom Supplier in Indonesia must be familiar with this country’s date market, their package requirement and the types of dates needed.

Kimia Gold Company is the main Supplier of Piarom dates in Indonesia.

This company supplies A-grade Piarom dates in a desirable packaging with an affordable price.

90% of Bangladesh population are Muslims.

Bangladesh has the 3rd largest Muslim majority in the world.

Hence there is a large tonnage of trade going on between these two countries yearly.

India being the main importer of Piarom dates, also supplies this date to Bangladesh very easily.

This country holds a specific share of Piarom export yearly.

Piarom has different varieties, there is a cheaper variety which is golden in color.

Kimia Gold Company is one of the main suppliers of Piarom dates in Bangladesh.

Kimia Gold Company supplies best quality Piarom Dates in FOB and CIF through Chittagong, the largest seaport, which is the second-largest city.