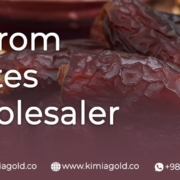 In India and some other countries, Piarom dates are called as Maryami dates.

These dates are among the most expensive dates in the world.

The skin and flesh of Piarom dates stick together, hence they are easily washed. Often, they are called as Chocolate dates.

As they are semi-dry dates, they have a moisture content of 17%.

To store Piarom for a long duration of approximately 18 months, they must be stored in proper packaging in temperature between -5° C to +5° C.

The only place of cultivation of Piarom is in Hormozgan province, located south of Iran.

Piarom is exported throughout Europe with luxurious packaging.

B grade Piarom is more golden color, it’s cheaper and gets exported to neighboring countries such as Turkey and Russia.

The size of these dates ranges from 2 cm to 5 cm.

Piarom Dates Wholesaler in the UAE

You can name Kimia Gold Company as a prominent Piarom Dates Wholesaler in the UAE as it has a branch installed in Dubai.

Formula One is particularly popular in the United Arab Emirates. The emirate of Dubai is also home to two major golf courses. Piarom dates as exclusively luxury dates are the guests at the tables of these events held in the UAE. The UAE importers look for a Piarom Dates Wholesaler who supplies Piarom in posh, fashionable and standard packaging. Kimia Gold has this advantage by owning a packaging unit. Hence it can print customer’s design on the package. Kimia Gold is the first choice of importers as Piarom Dates Wholesaler.

Kimia Gold Company is the prominent Piarom Dates Wholesaler supplying the expatriates and the Iranians with Piarom dates.

According to latest survey, India is considered as the first and largest importer of Piarom Dates. For the record, this year, dates mainly Piarom, worth Rs.15 crore were consumed during Ramadan in the Kashmir valley alone.

Kimia Gold Company, by having a cold storage facility located in Bam, can supply Piarom Dates on high tonnages throughout the year to India, hence it is considered as the biggest Piarom Dates Wholesaler.

Indonesia, a country located in Southeast Asia, consists of seventeen thousands islands, with a population of 270 million people. This country is the fourth-most populous country and it holds the first position in the most Muslim populated country.

Iran’s ninth export destination in the world is Indonesia. Iran exports to Indonesia was US$786.86 Million during 2018.

Kimia Gold Company is among the few Piarom Dates Wholesaler in Indonesia that has the capacity to supply Piarom to a 270 million date consuming hub.

In the holy month of Ramadan, there is a huge demand of Piarom dates from Kimia Gold Company, who is the most recommended Piarom Dates Wholesaler in Indonesia.

Kimia Gold Company by having all the knowledge about Indonesia’s tropical climate, its trade laws and regulations and its long transportation distance from Iran, has maintained a good position between importers as the best Piarom Dates Wholesaler.

Bangladesh a country located in Southeast Asia, shares land border with India. There is a strong trade relation between India and Bangladesh.

Considering Bangladesh drastic climate, the need for Piarom dates is met by Kimia Gold Company who is premier Piarom Dates Wholesaler as it provides the best quality Piarom in reefer containers and in limited span of time.

Iran mainly exported bitumen, Portland cement and pistachios to Bangladesh during the 12 months.

It is the eighth-most populous country in the world, with 164 million people.

90% of its population is Muslims.

These occasions are celebrated with public ceremonies, parades, and rallies by citizens, political speeches, fairs, concerts, and various other public and private events, and many schools and colleges organize fairs, festivals, and concerts. Piarom as the luxury dates, are present at almost every festival and event, which is supplied by Kimia Gold Company. As being an established Piarom Dates Wholesaler in Bangladesh, Kimia Gold has gained a lot of reputation in the last few years.

Kimia Gold Company is a well-known and famous Piarom Dates Wholesaler in Malaysia, especially in the holy month of Ramadan, where there is huge demand for Piarom Dates.

As Malaysia has a rapid date growing market, Kimia Gold Company is one of the first Piarom Dates Wholesalers to present Piarom to this market in a fashionable and standard packaging.

Kimia Gold Company by having all the knowledge about Malaysia and knowing all health benefits of Piarom Dates, has helped Malaysia with providing these healthy dates to the retired crowd of Malaysia. Hence Kimia Gold is considered as a favorable Piarom dates Wholesaler.

A total of 238,152 tons of dates worth $211.64 million were exported from Iran in the last Iranian year (March 2019-20), Kimia Gold Company is one of the main Piarom Dates Wholesaler in Malaysia.