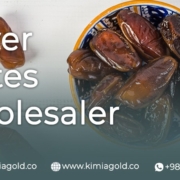 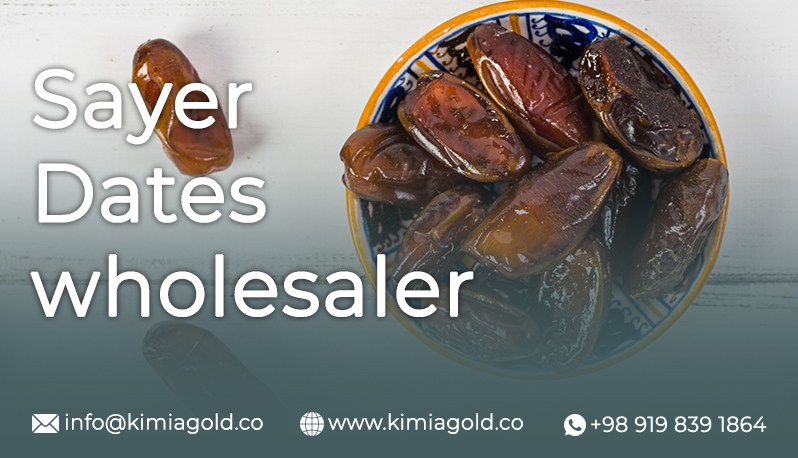 These dates are comparatively expensive dates.

Their moisture content is about 18%, hence they are considered as semi-dry dates.

To store these dates, you need special conditions, they have to be stored in cold storages with a temperature -5° C to +5° C.

The cultivation center of these dates is in Khuzestan, located south of Iran.

These dates are mostly exported instead of domestic consumption.

These dates are dipped in edible paraffin oil.

They are dark brown to reddish in color.

It is one of the major dates for export, which has many exports to Europe.

Sayer dates can be stored for a long time (about 15 months) in covered warehouses and at room temperature without any problems.

The possibility of shipping to distant countries without refrigerated containers is one of the significant advantages of this date.

You can refer to Kimia Gold Company as the top Sayer Dates Wholesaler in Iran, India , the UAE, Malaysia, Indonesia , Bangladesh and mainly Europe.

Bangladesh, a country located in South Asia, shares land border with India. Bangladesh and India are known to have good trade relations, hence you will be able to find different types of Sayer dates in Bangladesh imported from India.

These occasions are celebrated with public ceremonies, parades, and rallies by citizens, political speeches, fairs, concerts, and various other public and private events, and many schools and colleges organize fairs, festivals, and concerts. Sayer dates with different grades are present in these festivals for people consumption. Kimia Gold Company as the sole Sayer Dates Wholesaler in Bangladesh, supplies these dates in exclusive packaging.

Kimia Gold Company provides FOB and CIF services to Chattogram and Mongla for their huge consumption. Hence Kimia Gold is regarded as a prominent Sayer Dates Wholesaler in Bangladesh.

Straddling the Tropic of Cancer, Bangladesh’s climate is tropical, a hot and humid summer.

The country has never recorded an air temperature below 0 °C (32 °F).

Kimia Gold Company has been the favorable Sayer Dates Wholesaler in Bangladesh, as it considers Bangladesh’s drastic climate and exports these dates in standard and luxury packaging.

According to Iran and Bangladesh good trade relations, Kimia Gold has gained a good position as Sayer Dates Wholesaler in Bangladesh.

Being a multi-ethnic and multi-cultural hub, consumption of dates such as Sayer dates goes high at the time of festivals. Kimia Gold Company being an experienced Kali Dates Wholesaler in Malaysia, supplies these dates in best quality and best packaging and on time delivery.

The local climate is equatorial and characterized monsoons. Humidity is usually high. Kimia Gold as the most genuine Sayer Dates Wholesaler in Malaysia, exports these dates in standard and exclusive packaging in reefer containers.

The first choice of importers as the best Sayer Dates Wholesaler in Malaysia is Kimia Gold Company because it provides these dates on high tonnages with affordable price for the retired crowd of Malaysia.

In January 2017, Iran and Malaysia are set to pursue a free trade agreement. Both countries have integrated their banking transactions and also agreed to use local currencies along with Chinese yuan and Japanese yen in their bilateral trade. As of 2015, there are around 5,000 Iranian students in Malaysia, while only 15 Malaysian students in Iran.

A total of 238,152 tons of dates worth $211.64 million were exported from Iran in the last Iranian year (March 2019-20), Kimia Gold Company is the most famous Sayer Dates Wholesaler in Malaysia.

Sayer dates wholesaler in the UAE

The United Arab Emirates, preferably called as the UAE, is located in Western Asia. Due to its geographical location, quality transport infrastructure (including the port of Jebel Ali in Dubai) and tax incentives (no direct taxation for all foreign companies), the UAE is considered as key trade center. It’s most populous city of Dubai is a global city and international aviation and maritime trade hub.

It shares a maritime border with Iran. Iran has exported commodities worth about $1 billion to the UAE during the first three months of this year.

Kimia Gold Company can transact in other currencies such as US Dollars, Dirhams, Rupees and etc. as it has established a branch in Dubai. Hence Kimia Gold is the most preferable Sayer dates Wholesaler in the UAE by importers.

The consumption of Shahani Dates in Dubai is met by Kimia Gold Company.

The UAE is home to 2 major golf courses and Formula One, the biggest car racing event in the whole world. Consumption of dates such as Sayer dates is comparatively high during these events. Kimia Gold Company by having a good reputation between the importers as the most genuine Sayer Dates Wholesaler in the UAE, supplies best quality Sayer dates.

India with a major growing economy, located in South Asia, is considered as the second most populous country.

Bombay (Mumbai), India’s largest city, has a metropolitan area population of more than 15 million. Mumbai, as a historically important harbor and trade city, is home to two of India’s major ports: the Mumbai Port in South Mumbai and the Nhava Sheva Port.

According to the latest survey, India is regarded as the first and largest importer of Sayer Dates.

Kimia Gold Company owning a storage facility in Bam city, can supply Sayer dates to Indonesia throughout the year. Kimia God Company is reputable Sayer Dates Wholesaler in Indonesia who has the capability to feed 270 million date consuming hub.

Considering Iran’s good trade relation with Indonesia, Indonesia’s good trade position in the world, you can refer to Kimia Gold Company as the prominent Sayer Dates Wholesaler in Indonesia.

Considering Indonesia’s climate which is almost entirely tropical and Indonesia’s long transportation distance from Iran, Sayer dates are packaged in standard and luxurious packaging and exported in reefer containers by Kimia Gold Company who is the sole Sayer Dates Wholesaler in Indonesia.