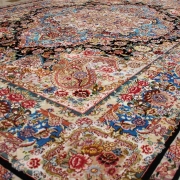 An important part of the problems faced by exporters is related to the government, decrees and laws that have been passed; In order to produce handmade carpets, raw materials must be imported that are not allocated government currency, but when the carpet is woven and the exporter wants to export it, he has 6 months to return the currency to the country through the Nima system.

You can also take a look at Iranian Kimia dates.

Carpet is not a commodity that can be sold very quickly in foreign countries, but the government says you have six months to return the export currency to the country, and this is one of the main problems for exporters.

Most of our raw materials, from silk to yarn and wool, are imported from abroad, while there is this capacity in the country so that we can at least use fleece and the fleece is not destroyed in traditional slaughterhouses and partly in tanneries.

We currently have 1.3 million carpet weavers in the country, of whom about 500,000 have been insured in the last five years, which was good news at the time, but now that this support from the government has been abandoned, only 200,000 people are covered by insurance, and this has left Iranian carpet artists unmotivated and almost half of them unemployed or have gone to other jobs besides carpet weaving.

A person who weaves carpets has no cost to the government and produces at home. Insurance is his only happiness for the future, the absence of which can shut him down; While today in Tehran we have about a thousand carpets that are serving customers; So, if anyone has a complaint against a carpet weaver or seller, they can go to the union, and in the union, we will give the right to the rightful owner by forming inspection and dispute resolution commissions.