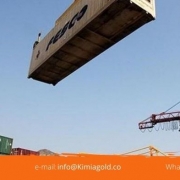 The president of Kerman Province Industry, Mine and Trade Organization, stating that the total export of Kerman province in 2020 has been $ 305477292, announced: “the export rate of Sarcheshmeh Copper Complex and other copper units in Kerman in the first quarter of this year from other customs of Iran was about $ 194982000.

In the Kerman Export Development Working Group, referring to the volume of exports in Kerman Province, Mehdi Hosseininejad said: “the commercial exchanges of the province in the first quarter of the last year was 88000 ton with $120,000,000; but due to the coronavirus outbreak and consequent restrictions in 2020, it reached $ 444000 tons and $110,000,000, so that compared to the same period in last year, there was a  40% decrease in April, 22% in May and 9% in June in export volume, and this is an ascending trend.”

He added, “In the first quarter of this year, the value of main export crops of the province included pistachio and pistachio kernels was about $ 98,000,000 and in terms of value compared to last year, it increased by 12%; whereas, more than $3,000,000 palm products and $1,500,000 copper products, molybdenum oxide 1,148,000 and other crops $ 4.6 million were exported from the customs of Kerman province.”

Announcing that they have exported $ 110,000,000 from the Kerman customs, he said: “According to the statistics of Kerman customs, out of a total of $110,000,000 in exports in the first quarter of this year, there were 93% in the agricultural sector, about 3% in the industrial sector and about 4% in the mining sector.”

Declaring that this year, the total exports of Kerman province were $305477292, he announced: “The export volume of Sarcheshmeh Copper Complex and other copper units in Kerman in the first quarter of this year from other customs of Iran was about $ 194982000.”

Stating that auto parts and agricultural machinery showed the highest decrease in imports, he added: “car manufacturers in Kerman province could not import the goods due to the exchange rate and closed borders.”

Announcing that the trade balance of Kerman Province is positive based on the province’s customs statistics as $ 77,000,000, he added: “Our target markets are China, India and 15 neighboring countries and the export plan to 17 other countries this year is estimated as $ 900,000,000.”

According to ISNA, Dr. “Mohammad Javad Fadaei” the governor of Kerman said: “Kerman province has many products that are demanded by the International markets, so we must be prepared for the export of the province’s products by removing obstacles to exporters.”