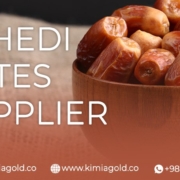 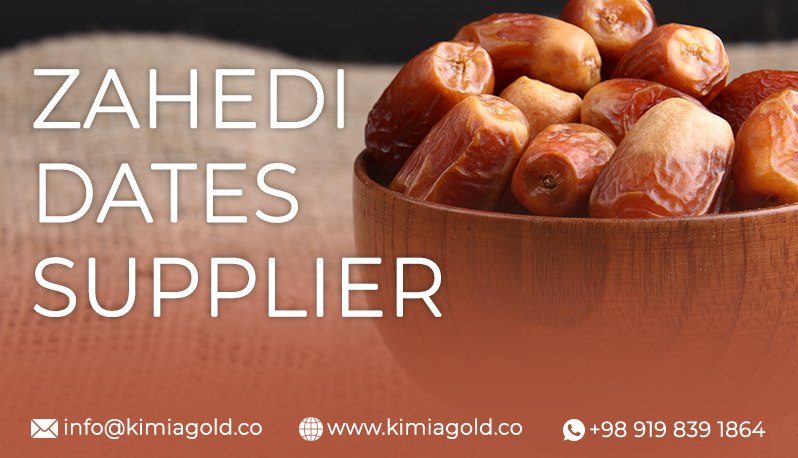 The best type of these dates is light brown to golden in color.

The skin and flesh of Zahedi dates are completely sticking to each other.

They are considered as semi-dry dates as their moisture content is 14%.

Special care should be taken to store these dates. For a long duration of approximately 18 months, they must be stored in proper packaging in temperature between -5° C to +5° C.

These dates are mostly exported to Asian countries such as Afghanistan, Pakistan and India.

These dates are considered as economic dates compared to other dates.

The cultivation center of these dates is in Fars, Booshehr and Khuzestan province, located in south of Iran.

Zahedi Dates are only cultivated in Iran.

Kimia Gold Company by having a cold storage in Bam city, can store Zahedi dates for upto 18 months and can supply these dates throughout the year. Hence Kimia Gold is the top Zahedi dates Supplier in Iran.

Dubai, the UAE’s most famous city is considered as the world date hub market.

The UAE is a country located south of Iran, who shares maritime borders with Iran. Hence there is a lot of trade going on between these 2 countries.

Due to the sanctions being held on Iran, many importers cannot work with Iran directly, hence they travel to Dubai to find the best Zahedi Dates Supplier in Dubai.

Kimia Gold Company supplies high quality Zahedi dates in Dubai by having a branch installed in Dubai. Kimia Gold is favored by many importers as the best Zahedi Dates Supplier in Dubai and the UAE.

Half of this country’s population is constituted of Indians and some portion is Iranian people. Zahedi being famous between Indians and Iranians, during the holy month Ramadan there is high consumption of Zahedi dates. Kimia Gold by having a branch in Dubai supplies high quality Zahedi Dates to these people. Hence it’s the best Zahedi Dates Supplier in Dubai.

A massive number of Muslim community habituates in India.

Zahedi dates are used as a food substitute in India in the holy month of Ramadan as the natural sugar present in it, regains the lost energy during fasting.

Kimia Gold is regarded as the best Zahedi Dates Supplier in India who can supply Zahedi throughout the year for this massive population, by having a cold storage located in Bam city.

Kimia Gold Company as the sole supplier of Zahedi Dates in India, follows all the rules and regulations of export to this country and supplies these dates in packages in accordance with the Indian market.

Many Indians do exercises like trekking and hiking, these mountaineers and athletes can also use Zahedi Date as a natural sugar to easily restore lost energy.

Indonesia is known as the biggest Muslim populated country.

It is the world’s fourth most populous country, with a population of 270 million.

There is huge consumption of Zahedi dates in the holy month of Ramadan, by the Muslim crowd of Indonesia.

Kimia Gold, who is fully familiar with trade laws, rules and regulations, is considered as the sole Zahedi Dates Supplier in Indonesia.

By having a cold storage located in Bam city, Kimia Gold can supply Zahedi dates on high tonnage throughout the year to Indonesia, hence Kimia Gold is the largest Zahedi Dates Supplier in Indonesia.

Having 164 million population, Bangladesh is regarded as the eight most populous country in the whole world. It is located in South Asia. Bangladesh shares land border with India. Hence they have strong trade relations, leading to Zahedi dates being available in Bangladesh.

90% of this population is Muslim populated.

People of Bangladesh are in love with sweets, such as Zahedi Dates.

Kimia Gold Company has many years of experience in the Bangladesh date market as it has been supplying Zahedi Dates to Bangladesh for a very long time.

Suppliers of  Zahedi Dates in Bangladesh should be well informed of the Bengali market and the suitable package used in Bangladesh.

60% of Malaysia’s population is Muslims.

Iran and Malaysia have good trade relations, hence yearly a fair amount of Zahedi Dates is exported to this country.

In the past few years, Malaysia has become a rapid growing date market, especially Zahedi dates who is favored by many.

With experienced experts and staff, Kimia Gold Company is fully prepared to provide its best services to Malaysia and supply the best quality Zahedi dates, especially during holy month of Ramadan due to its massive Muslim population.

Port Klang is the largest and most important port in Malaysia. Kimia Gold Company supplies Zahedi Dates through FOB and CIF through Port Klang to Malaysia.

Kimia Gold is regarded as the best Zahedi Dates Supplier in Malaysia who is equipped with shearing, shrink-wrap, vacuum and other machines for packing.