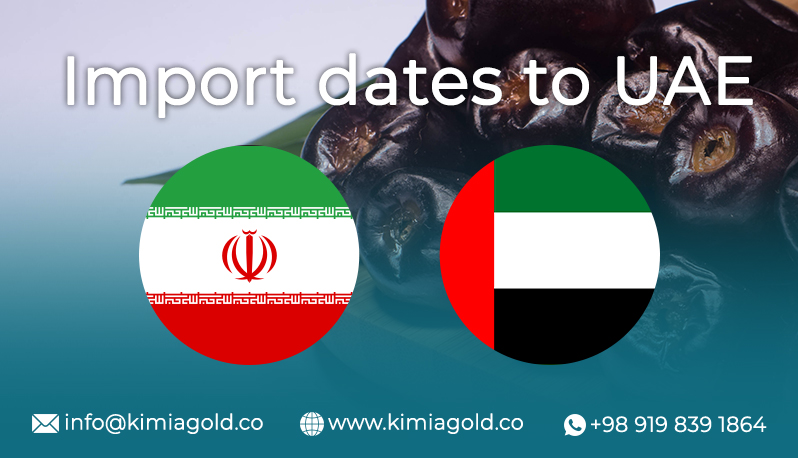 The UAE is one of the most important Persian Gulf countries.

It shares a maritime border with Iran.

In the first 3 months of the year, commodities worth $1 billion were exported from Iran to the UAE.

The UAE is considered as key trade center because of its geographical location, quality transport infrastructure and tax incentives.

Yearly, huge tonnage of dates are imported to the UAE.

Many importers from different countries travel to Dubai to find the best exporter of Iranian Dates.

Kimia Gold Company by having a branch installed in Dubai, can import dates to the UAE.

Iran is one of the biggest date producing countries.

Iran has unique dates for export to different countries.

For any enquiry regarding dates, you can contact Kimia Gold Company Experts.

Import dates from Iran to the UAE

The UAE, enjoying a good geographical position, is among the biggest importers of Iranian dates.

According to the latest survey, import of dates from Iran to the UAE proves this country’s interest in Iranian Dates.

Kimia Gold Company, by having a branch installed in Dubai, can easily import dates from Iran to the UAE.

Kimia Gold has gained a good position between importers as the most genuine company to import dates from Iran to the UAE.

An important feature of Iranian dates is their uniqueness.

Mazafati dates (Kimia dates), Piarom dates (Maryami dates), Kali dates (Kalute dates) and several other dates are among the best dates imported to the UAE, which are Iran product.

Based on the statistics of Kimia Gold Company, you can see this company’s ability to import high tonnage Iranian Dates to the UAE.

Import Mazafati Dates to the UAE

Mazafati Dates are also called as Kimia Dates in the UAE and some other countries.

Mazafati dates are the most popular and most imported dates to the UAE and the world, because of its special and delicious taste.

Kimia Gold Company, who is equipped with a cold storage facility in Bam city, imports high tonnage of Mazafati Dates to the UAE throughout the year.

According to Kimia Gold Company survey, first grade Mazafati Dates are mostly imported to the UAE in standard and stylish packaging with most reasonable price.

Import Piarom Dates to the UAE

Piarom dates are among the most luxurious and expensive dates in the UAE and also the world.

Piarom dates are called as Maryami dates in the UAE and some other countries.

They are also called as Chocolate dates due to their luxury appearance and taste.

Kimia Gold Company with having a branch installed in Dubai and a packaging unit, imports first grade Piarom dates to the UAE with standard and luxurious packaging.

Kimia Gold with many of experience in import of Piarom Dates to the UAE, has gained a decent position among importers as a luxurious brand.

Import Shahani dates to the UAE

Shahani Dates are the most economic dates among other dates in the UAE and the world.

These dates have a special taste and appearance.

During events such as Formula One and presence of 2 major golf courses, sweets such as Shahani dates served.

Kimia Gold, by having a branch installed in Dubai, can import Shahani Dates to the UAE and make transactions in other currencies such as US Dollars, UAE Dirhams, Indian Rupees and etc.

Possibility of repackaging for import

Date Importers and customers sometimes would like to repack dates with their own brand and label.

Kimia Gold Company who is equipped with a packaging unit, provides the possibility of repackaging dates with customer’s label for import.

The use of LC transactions

LC, which has helped many international businesses, is a guarantee to the buyer.

Kimia Gold Company who has branches in Dubai and France, can provide customers with LC if required.

The use of LC transactions is possible as per need by Kimia Gold Company.

Kimia Gold Company exports dates through CIF and FOB also as per customer’s need and demand.

Cooperation with Kimia Gold for import to the UAE

Kimia Gold Company has the advantage to offer different dates in different weight packages to importers.

Kimia Gold supplies dates in packages according to customer’s demand and need.

Cooperation with Kimia Gold for import to the UAE, will guarantee the health of consumers, as it has all national and international licenses, Halal certificates and ISO certificates.

Kimia Gold Company by having experienced staff and experts, can easily guide the customers to clear dates from the customs and assist importers in this field.

To put your order with Kimia Gold, you can use the E-mail and the Whatsapp number provided at the bottom of the page.

Kimia Gold Dates Company is one of the biggest producers and exporters of Iranian Dates.

Our mission is to fully understand clients’ requirements under various business segments and supply them with high-quality Dates.

Our main strength lies in the highly loyal and experienced staff is that we consider our most significant asset, and they are professionally trained to provide top-quality customer satisfaction.