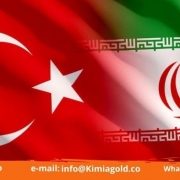 Iran seeks to fill the gap of the last four months, but currently it is facing long truck queues at the borders.

At this time, due to the outbreak of the Coronavirus, Turkey has restricted the entry of Iranian trucks to its border, but Iran is negotiating to increase the number of its export and transit trucks.

In addition, Turkey is the fifth major export destination of Iranian goods in the first four months of this year with 43,000 tons of goods worth $ 405 million exported to this country. According to customs statistics, Turkey received 5% of total Iran’s exports as 1,870,000 tons and Iran received Turkey’s imports as $ 1,178 million.

Turkey is the third largest source of imports for Iran, and its share of Iran’s total imports is about 11%. Iran’s trade balance with Turkey during the first four months of this year was also negative as $ 773 million in favor of Turkey.